More than often, a designer picks an existing material to fit the design. When Muuto recently embarked on remaking the Fiber Chair Family by Iskos Berlin in recycled plastic and FSC™-certified wood fiber, we had to compose a new composite material altogether – a journey riddled with challenges, fine-tuning and small victories.
We sat down with Silke Foged, Design Manager and Trine Mulvad Steffensen, CSR Manager at Muuto to talk about the challenges and opportunities the two were faced within the making of the new generation of the Fiber Chair. Along the way, they reflected on how color is a fickle thing in the hands of materiality, how unexpected results can lead you down untrodden paths and how we can all benefit from asking impossible questions.

Q: What was your hypothesis embarking on the process of reiterating the Fiber Chair Family?


Trine: We launched the Fiber Chair in a composite material consisting of plastic and wood fibers in 2014. Since then, it has become one of our most beloved designs. So for this reimagined version, we sought to see if we could replicate the original – essentially the very same chair – in a new recycled material.

It might sound like a modest challenge, yet reproducing the same strength and durability as the forerunner was a result of diving into the wildly complex world of mechanics and material properties. After two years of intense research and development here we are – we have proved our initial hypothesis to be possible.

Q: You have described the world of recycled material as a bit of a ‘wild wild west’. Why did Muuto want to remake the Fiber Chair in a new material?

Trine: Because it is profoundly important. We need to start thinking in a more circular manner, moving away from simply using virgin materials to incorporating recycled matter and other innovative alternatives that are becoming more widely available. If we were to say ‘it’s too difficult and we cannot make it happen!’ then at least I want us to have tried.

The limitations of the project have actually been the most exhilarating part of it. Boundaries make the creative process flourish and push you outside of your comfort zone.

Trine Mulvad Steffensen In the material development for Fiber, I spent quite a bit of time at the Technological Institute of Denmark, looking into the molecular build-up of the material and how we could manipulate it to work with the existing design. We ended up entangled in a whole new field of research for us.

Trine: If you aren't buying off-the-shelf materials, the procurement of recycled materials often happens through a materials exchange market. Like I said, it’s a bit of a wild wild west situation where you never quite know what you’re getting and if you will be able to buy the same material again in the future. Most recycled plastic today comes from household waste, more or less a murky shade of dark gray and of a vastly varying quality.

As we would need a steady supply to a material that can produce a replicable result with the same properties every time, we had to find a supplier that could guarantee just that. Our pursuit for the ideal raw material felt a bit like detective work, chasing leads with a lot of dead ends. Finally, we succeeded in finding a source of post-industrial waste material from eyewear production that makes up around 80% of the plastic in the Fiber Chair’s shell.

Silke: You know, the often poorer quality of recycled plastic can become an achilles heel in the design process. Yet here it really ended up taking us in unexpected directions, leading us to create a new material as well as the necessary tools to work with it.

Q: In order to replicate the Fiber Chair’s form and strength, you had to create a material that significantly differs from the original. How did you go about developing this and which discoveries did you make along the way?

Trine: On a molecular level, the new material is quite unlike the original. Previously the virgin plastic would drape itself over the wood fibers like a thin coating. In the black version, it would lay like a blanket over the fibers and as a result, they would only be visible to the naked eye upon very close inspection.

The recycled material does not embrace them in the same way, so the graininess of the fibers is much more tangible to both the eye and touch. The plastic and wood fibers are a bit like water and oil in this case. In the microscope, one can see that there are small air bubbles nudged in between them. By adding an additive that binds these together, we create a material that is super durable with excellent strength properties. It’s a bit magical.

In this way, the base material is very different. Plastic is not just plastic. Usually, we would find a material with a set of given qualities, yet this time around we are inventing a material that fits the bill. That means we have spent a vast amount of time tweaking, compromising in some departments in order to accomplish our goals in others. In the end, working with the new material has been a blessing, making the wood fibers tread more into the forefront of the design, producing a beautifully tactile surface.

Trine Mulvad Steffensen The recycled material does not embrace them in the same way, so the graininess of the fibers is much more tangible to both the eye and touch. The plastic and wood fibers are a bit like water and oil in this case. In the microscope, one can see that there are small air bubbles nudged in between them.

Q: Recycled plastic and wood fibers both come with an inherent color to take into account. How did the material test your usual way of approaching colors?

Silke: The great challenge here was to truthfully reproduce the original colors of the Fiber Chair Family in a completely new material without compromising on refinement.

With a relatively transparent recycled plastic material like the one we are fortunate to work with, the wood dominates the color more. As the annual rings of a tree trunk come in all shades of yellow and brown based on the conditions of a given year, the wood fibers of course vary in color. It is a natural material and that is part of its splendor.

As there is more yellow in the mix, we have to compensate with a contrasting color – in this case, blue. Old school color theory, really.

Trine: This issue becomes extra evident in the white version of the chair, its shell contains 10% rather than 25% wood fibers, which would make it look like cardboard. There simply isn’t enough color to suppress the yellow without going off-shade. It’s an equation we constantly have to balance.

The wood fibers in the material also create a definite sense of depth. This grain captures the light, accentuating the deep curves of the shell. Although it is a relatively subtle quality, you are able to not only see the fibers on the surface of the seat but also the ones deeper into the shell, creating a gradient with a sense of three-dimensionality.

Q: Let’s talk about the colorway for the Fiber Chair Family.

Silke: We chose to reproduce the Fiber Chair Family in recycled plastic in its original color scheme – Black, Grey, Natural White, Dusty Green and Ochre. These feel at home in a wide range of settings and with different bases we offer. They are very down-to-earth, nothing that goes quite ‘pow!’. Yet they are distinctly Muuto in the choice of shade.

Silke Foged The Dusty Green, for example, is a color both Muuto and our customers have really come to love. It just works across our universe. In a lighter environment, it feels more neutral and calm, while in a darker space it becomes a contrast, a new dimension, something different altogether. We use it across a range of our designs because it just speaks to other materials and objects, even if it’s a relatively bold color.

Trine: Actually, Dusty Green turned out to be one of the most challenging shades to work with. We would get the samples back from our supplier and they were great, but not quite there. With just a tad too much yellow it simply isn’t as sophisticated. It becomes a different reference altogether. We’re talking minute details, but these are the ones that make it all worthwhile – it’s what makes it not indifferent. If it's not just right, what’s the point of using it?

It’s all so unconscious. You do not have to be a color expert to see the difference. Even if the everyman won’t be able to put words to exactly what is wrong with it, they would be able to point out which one feels right.

The black is really more of an Anthracite, with a dustier, warmer feel. The wood fibers in the new material create a stronger, more definite sense of depth. This grain captures the light, accentuating the deep curves of the shell.

Silke: Meanwhile, the Ochre is a result of extensive testing just to nail the right shade – not too warm, not too cold. It ended up on the cooler side, with quite a bit of blue in it.

Ochre should be able to stand on its own, it can be a bold color, while it also easily works with the oak base of the chair. Put it next to a cognac-colored sofa and it sits really well next to it, becoming part of a universe it was kind of not intended for – it starts to mimic nature.

Q: What was the most surprising outcome of the project?

Trine: In the early days of the project, we were told that we should expect to use 50/50 recycled and virgin plastic. I am proud to say we proved them wrong. We were able to replicate the Fiber Chair with minimum of 80% recycled plastic, without compromising on strength and color and tactility.

It really is a great exercise – asking ourselves if we can do what shouldn’t be possible.


*Please note that Fiber Bar Stool and Lounge Chair variants with recycled plastic will be available in North America by Spring 2023. 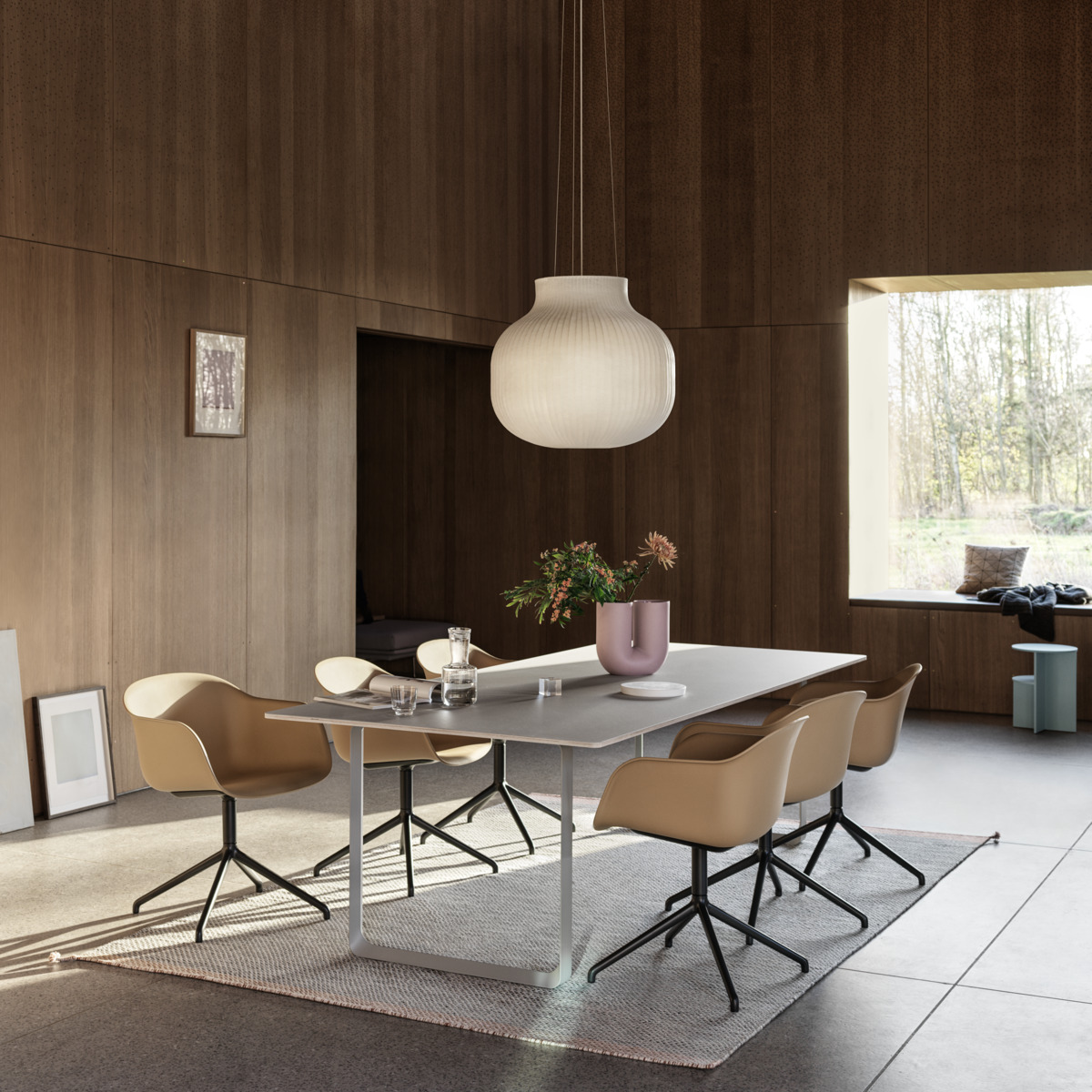 The Fiber Chair Family brings a new perspective on the iconic shell chair through its shell in an innovative composite of plastic and wood fibers for a uniquely deep surface and soft, matte touch.